Many people ask us when is a good time to visit Cape May to see the birds. The answer is any time you want or can get away! In Cape May, migration happens 365 days a year, northbound or southbound! And because of Cape May’s diverse habitat, the peninsula supports 146 nesting species. In Cape May harbor’s back bays: laughing gulls; in the marshes: herons and egrets; in the woodlands: scarlet tanagers; in the hardwood swamps: Prothonotary Warblers; in the fields: Yellow Warblers and Yellow-breasted Chats! 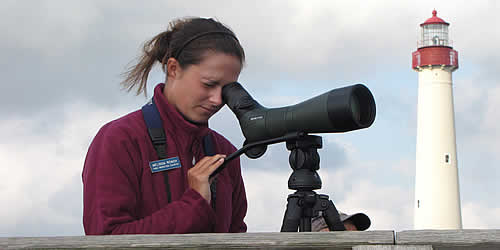 Pete Dunne, the Director of the Cape May Bird Observatory, is one of many experts in Cape May. The following is an excerpt from one of Pete’s articles in Nature Watch News.

North America’s most famous and most exciting birding hotspot is Cape May, NJ. No place offers great bird spectacles more often. In no place is the possibility of finding something new and exciting so much a matter of fact.

The peak of the southbound shorebird migration actually occurs in late July (right at the peak of the summer tourist season). For migrating warblers and flycatchers the migration peak occurs during the last week in August and the first week in September.

While the possibility of finding something truly rare is what drives many keen birders to Cape May, it is the massed spectacle that has earned the cape its fame and the title of ‘North America’s most famous birding spot.’ These include staging Red-throated Loons in April, migrating Tree Swallows in August and September, migrating hawks from September through November, migrating seabirds from August through January. Principle among the great concentrations are the shorebird flocks that mass on the beaches of the Delaware Bay in May and early June to feast upon the eggs of the horseshoe crab. Over one million birds are accounted in the gathering- the second greatest concentration in North America and the most visually arresting.

There are many wonderful places to see birds across North America. No place enjoys all these facets and absolutely no place offers so much so close to the amenities available in a resort town.”

Check for Cape May area hotels and restaurants, plus birding info on www.westcapemaytoday.com.

For more birding information, visit Cape May Bird Observatory website at www.njaudubon.org or call the Bird Hotline at 609-898-BIRD.